Posted by Mon Valley Leathernecks at 12:45 PM No comments: 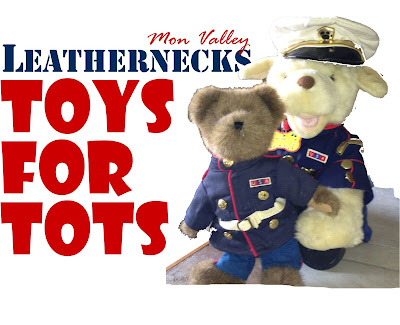 The placement of the toy for tots boxes being throughout the Mon Valley will begin on November 01, 2015.

A few significant events in the history of U.S. and the Marines.

"Thoughts for the Month"

"A test of a person's breeding is how they behave in an quarrel."

"Tact is the ability to keep silent while two of your friends are arguing and you know both of them are wrong."

"You have brains in your head. Your feet in your shoes. You can steer yourself any direction you choose." Dr. Seuss

"If poverty is the mother of crime, stupidity is its Father,"

"Some folks have such an open mind that nothing stays in there long."

"There is no pillow so soft as a clear conscience."

"Religion furnishes education with a true sense of values. It shows what is worthwhile."

"He who parades his virtues, seldom leads the way."

Be sincere with your compliments most folks can tell the difference between sugar and saccharine."

"You don't have to institute a lawsuit to collect the "wages of sin."

"Some wives have such good memories that they can even remember things that never happened."

"Many folks are like steel, when they lose their tempers, they're worthless."

"An unusual amount of common sense is sometimes called wisdom."

"A gentleman is a man who makes it a cinch for a woman to remain a lady."

"Brains and Beauty are Nature's gifts: character is your own achievement."

"Too many people are anxious to give Advice when what you really need is help."

"The choice is simple - you can either stand up and help or lie down and be counted."

"The gates of opportunity swing on four hinges: Initiative, insight, industry, and integrity."

Posted by Mon Valley Leathernecks at 6:54 PM No comments: 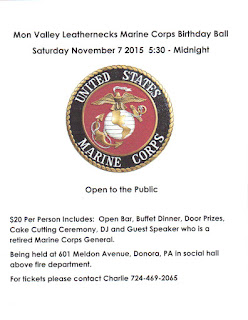 Posted by Mon Valley Leathernecks at 5:34 PM No comments:

A few significant events in the history of the USA and the Marines.


Thoughts for the Month

"An unusual amount of common sense is sometimes called wisdom." "No garment is more becoming a Christian than the cloak of humility."
"Wise folks sometimes change their minds - Fools never."
"Folks of genius are admired; Folks of wealth are envied; Folks of power are feared, but only folks of character are trusted."
"A Fool tells you what he will do; A Boaster what they have done; The Wise person does it and says nothing."
"It takes a big person to sympathize - A little person can criticize, and usually does." "The greatest remedy for anger is delay."
"Stupid mistakes are made by others - We only make unavoidable errors."
"What a scarcity of news there would be, if everyone obeyed the "Ten Commandments."
"The gates of opportunity swing on four hinges - initiative, insight, industry, and integrity."
"Praise does wonders for a person's hearing."
"Keep your fears to yourself. Share your courage with others."
"There is one difference between a tax collector and a taxidermist. The taxidermist leaves the hide."

Honor   Courage   Commitment
Posted by Mon Valley Leathernecks at 6:56 AM No comments:

Dear Marine,
You are cordially invited to attend the Mon Valley Leatherneck's annual picnic on Sunday, August 23, 2016. The picnic is free for all attendees and will be held at Palmer Park: 1601 Meldon Ave, Donora PA 15033.
There will be plenty of shade and fans around the pavilion to stay cool, and, if that does not work, the kids will be more than willing to drop a water balloon on your head. So, bring your family, friends, and new Marines to accompany you for this fun time.
The organization will be providing food for the grill (hamburgers, hot dogs, etc.) and drinks. We ask that you please bring a covered dish to the picnic. Below are some ideas of what could be brought.
There will also be games, half the take and Chinese auctions (so bring some money), and giveaways!
We have all different eras of Marines, so, I would like to have a table set up where we could display/share our military experiences. Anyone who would like to be included in this, try to let me know ahead of time, if not, just bring them to the picnic with you. We look forward in seeing you this year!
Sincerely, Julie Marsich, Picnic Chairman
Mail R.S.V.P.'s to: Julie Marsich 550 Highland Ave North Charleroi, PA 15022
Or Call: 412-496-9564
List of food items: fruits...vegetables...salads...casseroles...pastas...meat appetizers
Posted by Mon Valley Leathernecks at 6:41 AM No comments:

A few significant events in the history of the USA and the Marines.


Thoughts for the Month

"You can change without improving but you can't improve without changing."
"A goal without a plan is only a wish."
"The best index to a person's character is (a) how they treat folks who can't do them any good, and (b) how they treat people who can't fight back."
"It is not by a person's purse, but by their character, that they are rich or poor."
"Folks always get into trouble when they think they can handle their lives without God."
"Make each day count, but don't count the days."
"Nothing confuses a man more than to drive behind a woman that does everything right."
"Greatness is not found in Possessions, Power, Position, or Prestige. It is discovered in Goodness, Humility, Service and Character."
"God doesn't call us to be  Successful. He calls us to be Faithful." "A lot of trouble is caused by combining a narrow mind with a wide mouth."
"When a wise man argues with a woman, he says nothing."

Honor   Courage   Commitment
Posted by Mon Valley Leathernecks at 6:18 AM No comments: